One of our staff members, Ms. Yuri, lives by the Komatsu creek near the center of Miyazaki. A few nights ago, during a summer rainstorm, she could hear the constant cries of a kitten coming from outside her house. 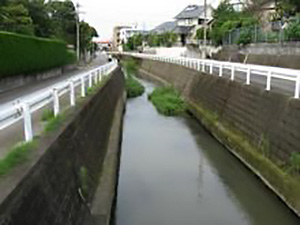 The cries went on and on. They were too much for Ms. Yuri to bear. She put on her raincoat, got her trusty flashlight out, and went searching for the source.

She looked and looked. First around her house, then around the neighbors’ and then in the narrow spaces between the houses. Not a thing! She kept hearing the cries, which were being muffled by the sound of the pouring rain.

As she turned around to have another look on the way back to her house, by sheer luck, the light from her flash struck a small area at the bottom of the creek.

There, on a narrow concrete ledge, was a small, white bundle. It was a tiny kitten, perhaps no more than a few days old, had to have been left there by a heartless somebody.

Ms. Yuri climbed down the steep, slippery wall of the creek, rescued the scared, half-alive little kitten and took it home, not knowing whether it will survive the night. But it did! In the morning, the little thing got a ride to the vet, who gave it a clean bill of health. 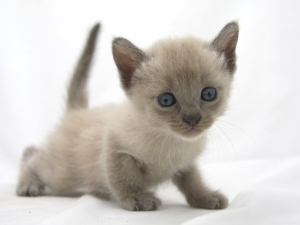 KoKo is a bundle of joy. She has brought nothing but happiness to Ms. Yuri’s house. Shame on the person who abandoned her.