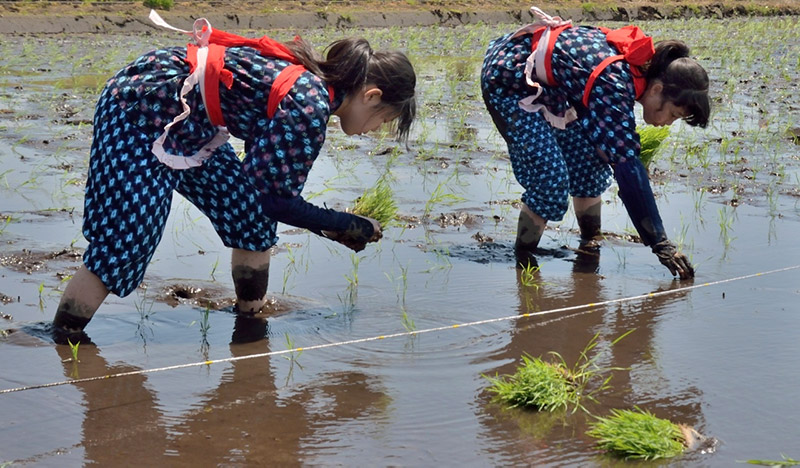 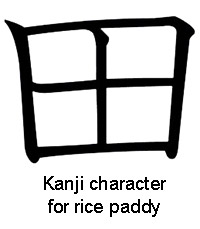 The Japanese character for rice paddy is ta. It is a simple, stylish character which depicts equally divided rice paddies, representing fairness and sharing.

Rice farming is an integral weave in the tapestry of Japanese cultural identity. There are thousands of haiku poems about rice. The rice paddy kanji ta (sometimes pronounce da) is in surnames such as Tanaka, Fujita, Yamada, Akita, among many more.

In short, rice is in Japan’s collective DNA.

Organized rice cultivation in Japan began during the iron-age. Since then, it has permeated every aspect of Japanese culture and daily life.

You cannot think of a traditional Japanese meal without rice. The word for cooked rice in Japanese, gohan, is synonymous with the word for meal. When food is ready, mothers announce it to their children by saying gohan desuyo (lunch is ready). Friends and office workers commonly ask each other gohan mo tabeta? (have you already eaten?) to inquire if he or she wants to share a meal. 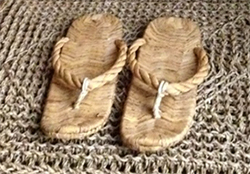 But this is only where the story begins. Japanese use rice to make vinegar, flour, and alcohol. They make rice bran oil from it, use its powder to beautify skin and even put it in soap. They use the straws (wara) to make tatami mats, weave it to make rope, sandals (waraji) and beautiful baskets.

Perhaps most importantly, the Japanese consider collective rice farming as a central pillar of their communities — living and working together in harmony, caring for the land and being grateful to the heavens for its gifts.