Kimiko-san is my 84-year-old aunt. She was born in 1927 in Hinokage, the first child of a hard-working couple who ran a pharmacy on the main street. 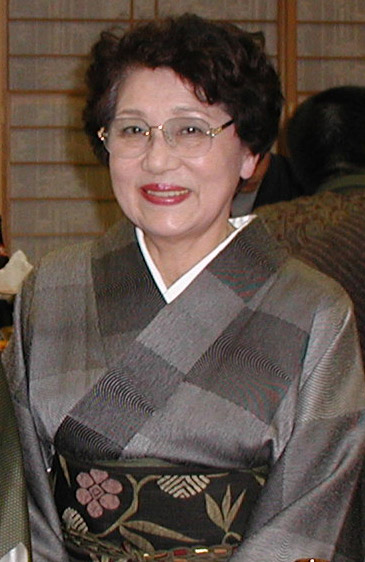 If you meet Kimiko-san, the first thing you will notice about her is her warm, captivating smile; so serene as to leave the impression that this kimono-clad graceful lady has never known a day of hardship in her life.

Nothing could be further from the truth.

When Kimiko-san was a child, Hinokage was experiencing an economic boom due to the discovery of tin in the nearby Mitate mine at the turn on the 20th century.

People came from all over to seek out their fortune; businessmen, British mining engineers, Chinese and Korean laborers, Kabuki artists and entrepreneurs added to the population.

Those were happy years. Although Japan was at war in Asia, and there was political turmoil in parts of the country, Hinokage was a relatively peaceful place. Kimiko-san has fond memories of those years when age-old traditions filled the daily life, and familiar faces were everywhere.

And then calamity struck. Kimiko-san’s parents died during a typhoid epidemic in 1942; first her father in July - on the same day as Koichi’s 3rd birthday - and then her mother during Obon, one month later. Kimiko-san was still a child of 15, but now she had four younger ones to care for.

This picture was taken on New Year’s Day in 1943, a few months after the death of children’s parents. Kimiko-san is the tall girl standing in the back. Shoko (my mother) is to her left. Yuko is far right. Noriko front left. Koichi front center. The lady in the center is a relative. Boy to the right and girl to Kimiko-san’s right are cousins.

The only source of income the family had was the pharmacy on the main street. To save the family, Kimiko-san accepted the marriage proposal of a young local pharmacist, who could help her run the business. She was 16 years old.

Years went by. The war devastated Hinokage. The mine shut down, and many people left town for good. Those were hard years, Kimiko-san remembers. But eventually, things got better; the children grew up, and the business prospered again.

I want to think that throughout all the hardships, Kimiko-san always knew that what she had to do was work hard and never stop smiling. That is what she did, and that is how she kept the family together.

Today, Kimiko-san still runs the same pharmacy, by herself now, in the same place in Hinokage. She is active in the local business council, takes hula dancing lessons, practices singing and participates in cultural events. She is the matriarch of the family, whom everybody loves and respects.

Time goes by, and memories fade. I too will forget many things over time, I’m sure. But one thing I will always remember is Kimiko-san’s beautiful, enchanting smile.