They are a curious mix of animal, human, and the supernatural. They are called dogū (土偶, clay figure) and perhaps the most remarkable representation of Japan's Jōmon culture (12,000 BC), a Neolithic era before the advent of rice cultivation.

The dogū are humanoid clay forms, richly decorated or homely and unadorned. Some 18,000 of them have been unearthed to date, in Jomon-period settlements stretching from the southern island of Kyushu to the subarctic regions in Hokkaido. The oldest is nearly 14,000 years old, the youngest a mere 2,300. Still relatively unknown in the Western world, and despite their advanced age, they're an integral part of Japan's living culture today. 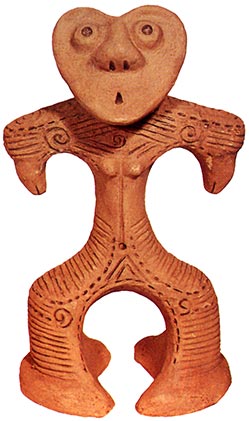 The dogū is oddly hypnotic, beautiful, brutal and uncanny: a cat-faced dogū, designed without legs; a humanoid with an outsize heart-shaped face; a sturdy dogū wearing an enigmatic triangular mask, and perhaps most famous of all, a "goggle-eyed" dogū which continues to inspire modern artists and manga creators to this day. There are dogū with horns, with flat heads, bow-legs and ones wearing knee-pads.

"The Japanese archipelago during the Jomon period was occupied by a large number of different groups of people or different societies. They probably spoke several different dialects and expressed themselves through a huge range of pottery styles," explains curator Dr. Simon Kaner, an archaeologist of the Sainsbury Institute who specializes in the prehistory of Japan.

The dogū, though intensely local to Japan, indeed manifest a shared urge by Neolithic peoples around the world to represent the human form in clay — Humanoid figures of comparable age have been found as far afield as Mexico, Turkey, Ecuador, Romania, and Egypt.

The function of dogū remains mysterious. Many were undoubtedly "everyday" objects, used by ordinary people for mostly yet unknown reasons — the majority have been found broken, some in heaps. If they were toys, what does that imply about the status of children, or the very idea of childhood, in Jomon cultures? Some dogū were certainly given special treatment — placed alongside burials or enshrined in pits. Whatever their ritual or workaday function, the dogū are also irresistibly art. 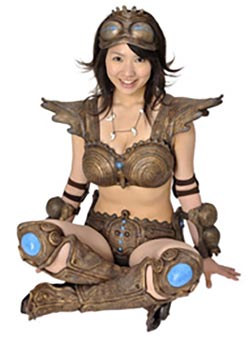 They feature in the "Understanding Japanese History" comic-book series narrated by cult robocat "Doraemon," whose human sidekick Nobita remarks that they "look like aliens." In the Play Station game "Doki Doki," the dogū are indeed aliens. Shinji Nishikawa's "Dogū Famiri," a seven-volume comic series, features a family of figurines trying to fit into everyday life — shopping, attending school and protecting the usual assortment of manga characters from an evil, UFO-controlled dogū, and "Dogū-Chan," the scantily-clad heroine in the TV series "The Ancient Dogū Girls." 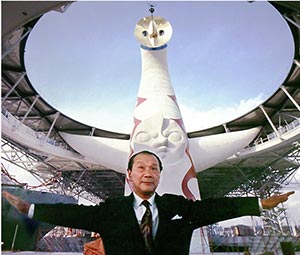 The dogū has inspired numerous modern artists. Among the most remarkable is Taro Okamoto (1911-1966,) a post-modern Japanese artist noted for his abstract and avant-garde paintings and sculpture.

Okamoto's work, both painting, and sculpture, was profoundly influenced by his affinity with Jomon design.

He once wrote: "The violent existence of Jomon ceramics manifests itself in a pulse of energy that can never be grasped by normal aesthetics and intellectual control."