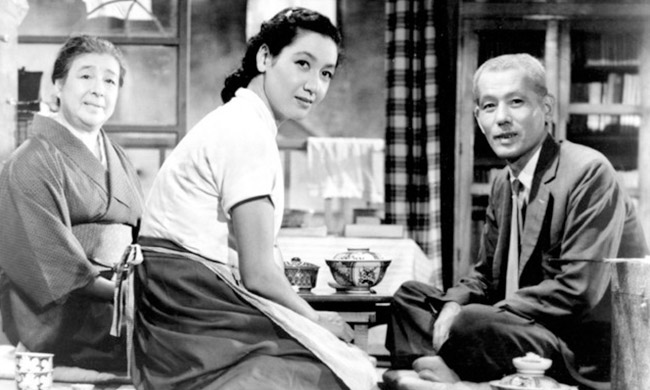 Tokyo Story is a tale of contrasts and the clash between the old and the new worlds. On the one hand, it shows that the old values, although noble, cannot create happiness and harmony as they once did; and on the other hand, it portrays the destructive potential of the modern consumerist culture. Ozu does not pretend to have the answer.

He tells a simple story of an elderly Japanese couple visiting their middle-class children in the city. It is a tale of change and disappointment, with a dignified, yet misplaced, sense of acceptance.

As a director, Ozu always believed in the simplicity of the art. Like a Japanese haiku, Tokyo Story hides great depth beneath a simple facade. The plot is uneventful: the parents arrive to discover that their grown-up children have no use for their presence. Indeed, the only person who seems pleased to see them is their daughter-in-law (played by Setsuko Hara) whose husband had died during the war.

Shooting in the minimalist style he is famous for, Ozu sets up each scene with equal simplicity, using a fixed camera that never moves from its starting position as the drama unfolds in front of it. There are no arguments, shouting matches or violent scenes – just subtle rejections, covered up by Japanese social etiquette.

What makes Tokyo Story so great, is how Ozu invites us to observe what’s occurring beneath the surface of the drama.

Sketching the parents’ cool, yet somehow touching, relationship with each other, their disappointments, and their sense of aging, Ozu paints a dark image of everyday existence and grinding acceptance.