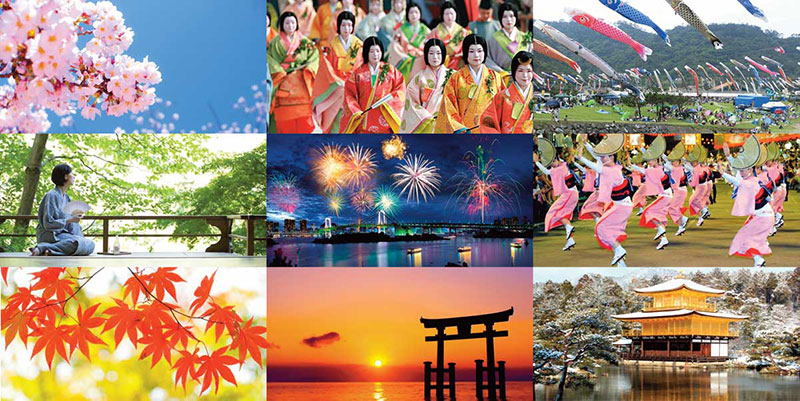 I often get asked about the best season to visit Japan. Such a seemingly simple question. However, there are more choices and more “seasons” than most people realize.

Japan is a land of ever-changing seasonal tapestries in urban and rural landscapes, food menus, festivals, wardrobe, home, and office decor, and store offerings, to name a few. And, that’s where the story begins. 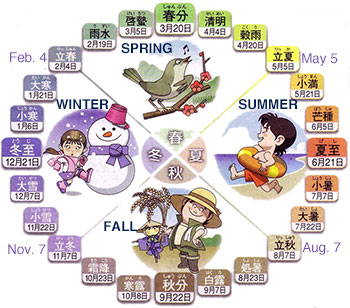 The traditional Japanese almanac (nijushi sekki) divides the year into 24 seasons or season-like periods (you can read more about it here).

These 24 periods are observed on Japanese calendars. They are markers of equinoxes and solstices, weather patterns, and ecological phenomena such as migrations and hibernations.

Traditional Japanese cuisine, festivities, wardrobe, and decor are inextricably woven into the fabric of Japanese almanac.

Japanese Art of Sensing the Seasons

To experience Japan, it helps to know about kisetsu-kan (sense of season) — an orderly system of thought for appreciating the seasons — embedded in Japan’s collective psyche.

Kistesu-kan goes well beyond cherishing the “best” of what a season offers at its peak (called shun). It also includes prizing early-season arrivals (hashiri), as well as late-season offerings (nagori).

In Japanese cuisine, examples of hashiri are things such as early-season fruits.

Think of season’s first arrival of melons or mangos. They are a bit small, a tad hard and not very sweet. Despite all these, they can fetch astronomical prices in Japan.

The value of hashiri fruits is not in their taste; they are harbingers of good things to come.

hashiri is not just about food. The beautiful cherry blossom buds which are about to bloom are also hashiri.

shun is the majestic beauty of sakura in full blossom.

Other examples of shun are foods and ingredients at the peak of their ripeness: tender bamboo shoots in spring; juicy melons and tomatoes in summer; chestnuts, mushrooms, and sweet potatoes in autumn; delicate mikan tangerines and ripe kaki persimmons in winter.

Things which are nagori remind us that it is time to say thanks and bid farewell.

Overripe fruit is nagori. The last snow of the season, bearing the promise of spring’s imminent arrival, is called nagori-yuki.

The beauty of falling cherry blossom petals in a gentle spring breeze is also nagori.

So, what is the best season to visit Japan?

There are 24 seasonal periods in the Japanese calendar — each gracing us with hashiri, shun, and nagori offerings — which makes picking any one time of the year as “the best” a daunting, if not impossible, task.

My recommendation: Come at any time!